By Melinda Haas in Uncategorized on February 3, 2020February 4, 2020
No comments

I wasn’t going to get married again. That was completely out of the picture. I was open to relationships, and I was willing to be committed on a day-to-day basis. But no more vows. No more legal ties and financial entanglements.

Melinda was living with me. I loved her. But marriage was not in my vocabulary.

My kids saw things differently. On the drive home from church one Sunday, they folded the programs into one of those paper fortune tellers. You pick a number, and then a color, and then it tells you about your future.

My daughter was asking the questions. My turn came. I picked a number, a color.

My fortune: “You are going to marrie [sic] Melinda.”

She did it again.

I picked a different combination.

Same fortune: “You are going to marrie Melinda.”

I didn’t say this to the kids, but that wasn’t going to happen. Marriage was not in my vocabulary.

Two months later, while perched on the edge of a thousand foot cliff, wind threatening to blow us to our deaths as rain clouds gathered, I asked Melinda to marry me.

Life doesn’t usually turn out the way we think it will. The pain and disappointment can make us jaded and calloused. After all you’ve been through–after all I’d been through–why take another risk? That’s what kept going through my mind for two hours on top of that mountain.

But was it a bigger risk to not take a risk?

I wrestled with that question while perched on the precipice, breathless from the panorama plunging 5,000 feet below me. She had already made it very clear. She wanted to be married. My hesitation had created tremendous conflict over the previous months. The promise of forever wasn’t enough, and Melinda was planning to move out to create some space to reflect on where we were going in our relationship. As we flew to Albuquerque so I could meet her parents, we both were wondering if this was the end. Kind of awkward. I knew that if I didn’t ask her to marry me on that mountain, I would probably lose her. Did I want to take that risk?

If I lost her, my kids would lose her, too. And they loved her deeply. Melinda had brought so much joy and color and stability to their lives since she had become part of the family. Did I really want to put them through that kind of pain? This decision wasn’t just about me.

Maybe it was the oxygen deprivation in the rarified air at 10,400 feet. Maybe it was the make-out sessions with this super hot, sexy lady on the edge of those cliffs. Whatever it was, I made the leap. And we lived happily ever after.

Well, not quite. But after five years of life together, I can say that it was definitely worth the risk. I’m really glad I jumped.

Everyone defines their relationships differently. Your risk is not the same as mine. But when the time comes to take a leap, do it. Don’t miss the opportunity because you’re too jaded to commit.

Melinda is a writer, blogger, artist and teacher. She lives in Wisconsin with her family. View all posts by Melinda Haas 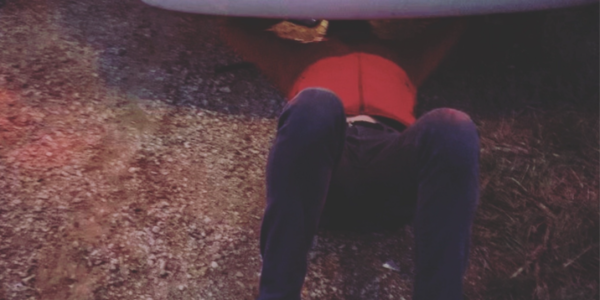